Vol. VI is the final chapter in Samuel’s intricately crafted Character Series project: The Aventurs of SnakeMan Jones. The project was delivered to the Collective in bi-weekly installments over the past couple months: Vol. I, Vol. II, Vol. III, Vol. IV, and Vol. V, and before we kick off the final volume, we’ll take it back to where it all started, in Samuel’s words:

This is a new sort of writing experience and I feel like it’s off to a good start. This project actually originated as a collaboration piece with a student of mine who was often drawing these really fantastic monsters and such. I told him that I would write a story about the monsters he drew and this is the first of that run. On this past Saturday, I showed him the monster I had reworked and gave him a brief of the beginning of The Adventurs of SnakeMan Jones. After studying the piece and seeing the development of the collaboration, he gave his 2 thumbs up approval and said he likes where the character and story are headed. This has been a really exciting adventure and experiment. Enjoy it! 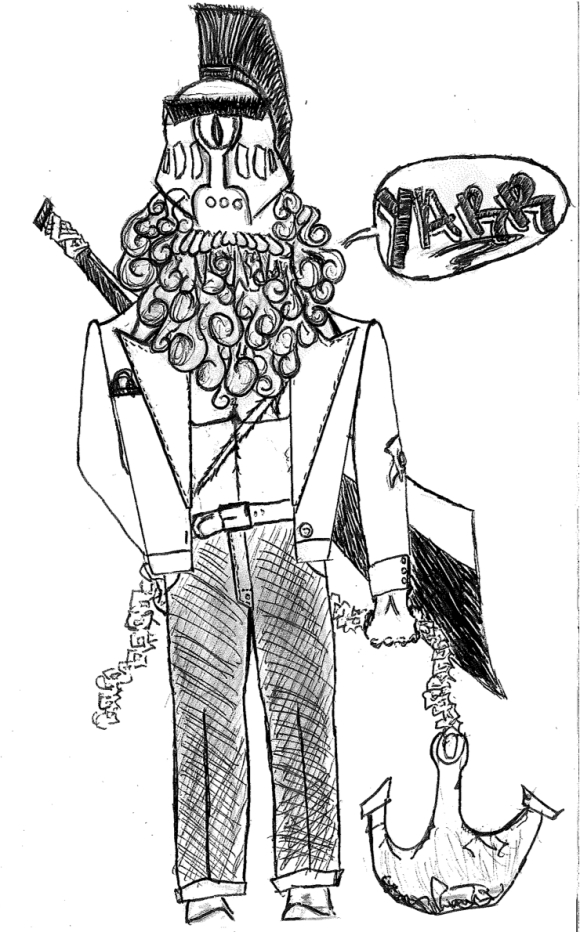 The Adventurs of SnakeMan Jones

As they stepped into the chamber, there was a spirit of awe that swept over each and everyone one of them. A beauty so divine it cause a silent reverence, there were no words that could express. Through time, it was told that in that moment each and every one who stepped in elevated from earth to another space.

Climbing through slim space, squeezing to find that next step, in the chamber there was so much to see. It was a dream. In the center of the space was a small island covered by the thickest lush grass any of them had ever seen. Even more amazing was the poppies that covered it, they grew in bushels; thick stems 6-8 inches out the ground each crowned with the most noble of gold petals leafed together dense and full of organic vitality. These were the fullest flowers any of them had ever seen. They must have been well nourished by the spring on the left hand side of the room. It was pouring in fresh water from the hills above; into the room spinning serenely around, filling the pool around the raised meadow.  Above it all the cave was open, the sky exposed as the rims of the chamber bit at the deep blue hue that canopied the sky. In the high of the night there she was, the moon, shinning down, pouring over into the scene.

The walls danced with the reflection of the water and the room was well lit. Unfolding of the night’s magic was soon to beginning, the poppies began to stretch out their petals and reach toward the sky. The Fallians filed in drawn by the scene; without direction they found themselves lined up alongside the water. This place was a sanctuary, hidden in the heart of the land. The combination of the moon’s white light and the gold of the petals were as rich as milk and honey. Surely there was never such a fantastic sight as this. Each one of the StaggMooreFallians had forgotten about the usual feast that would be taking place and the ceremonial processes had been removed from all thought. This was the truest Full Bloom Festival.

Along the walls under the shining from the water were carvings. Pre-modern characters that vaguely resembled the literary code that they used in the current time; it was a sign that people had been there before. Years ago long past the memories most of them had. There were two women who could read the message. They came over with the assistance of some of the younger men. With a deep focused look at the carvings, they got closer. Still not completely convinced they were really seeing what was in front of them, they read it out loud, “Footsteps will fade, and the light of day may fall away, still in the night a glorious sight guided by light, we have again found the truth inside, the wave that moves this mountain’s tide.”

Beyond the island, Jones had just arrived to his humble refuge; that small island uncharted by any cartographer. His Bike parked next to a short palm tree, white sands stretch out under the soft lapping of the sea. He climbed onto the hammock as it swayed loungely in the night’s breeze; as he sat up reflecting on the day he untied his boots, and set them to rest. No need for a fire, the moon was bright enough to light up the eve. Swaying in the cool breeze, he grabbed his jugg and took a few easy swiggs. Back to the peace of his own space, the calm way he preferred to live. Looking up the stars were shining so bright, the constellations locked into an eternal battle of glory, elegance, and might. He pondered their story. Still, the Moon was the highlight; Jones felt he had never seen a moon so radiant, such a glorious moon. As the night grew deeper and the blue darker, Jones sank further into the hammock’s swing. His eyes settled into a soft close. As he drifted into rest, the jugg dropped from his hand and slumped into the sand. The tilt was so that some of the spirit splashed out onto a lone flower. Its amber color shone refreshing as the night’s dew, running down against a tight budd of golden petals. There he was again, that little lizard; scuttling zigg zagg traces across the sand making its way to the flower. Up he crawled and lapped away at the amber dew. As quickly as he came, he was gone; running back toward his hiding spot, this time with a little more zigg to his zagg. The flower opened in that moment, unfolding magically, reaching out toward the heavens.

She smiles down upon them, pouring into the scene with a beauty so divine, serene—The night’s queen.