3 Comments
By the LIFESTYLE Music

Vivian Garcia has a wealth of experience as an artist. She has graced stages on multiple continents and draws from influences that are so varied yet performs each with grace and skill. A gifted vocalist who recently began accompanying herself on the guitar, Vivan has been involved with musicians and scenes located on both sides of the Atlantic Ocean and has connected with a global network of talented people.  We are extremely proud and excited to host her feature. Peep the dialogue below and check out her original track “Cold Bed,” and a link to her sound cloud following her words. 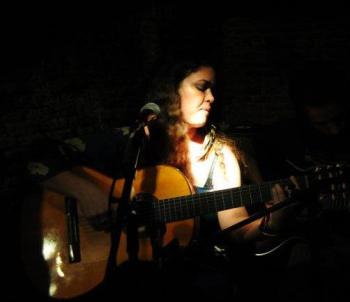 VG: I am from Chicago, Illinois and a child of Cuban immigrants. I was raised on the north side of the city and glad of it as it is the most diverse part. Growing up I had friends who were Armenian, Turkish, Jamaican,Haitian, Philipino, Jordanian, Puerto Rican, Mexican, Cuban, Romanian,Indian, Pakistani, Assyrian…the list goes on. I did not realize then how influential the contact of these cultures would be in my music and my overall formation as a human being. I would not have it any other way.

I currently live in Madrid, Spain. I have been here since the fall of 2010 working on an M.A. Spanish and Latin American literature. I dreamed of living in Spain since I was 18. I tried as an undergrad to enter a study abroad program but was not accepted. In 2002, I tried once more, this time to a M.A. Program and was again not granted acceptance. In 2005, I left a post as an administrator for an alternative school system in Chicago to FINALLY come live in Spain. I studied Flamenco guitar for 3 months in Granada ( still my FAVORITE Spanish city) and from that point on vowed to return as often as possible.  In 2009 I returned to Granada to again take Flamenco guitar lessons at the Carmen de Las Cuevas school and in 2010 was FINALLY granted admission to a Master´s program at Saint Louis University in Madrid.

I spend my time between my two muses, literature and music as well as the two cities Chicago and Madrid. I go home over the summers and Christmas to play shows and visit with family so it is not uncommon for my friends on FB to wonder which city I am residing in at any given moment.

VG: I believe that art, in any of its mediums is not a passive endeavor. While some forms are created in solitary moments, painting for example, it is still a synthesis of the artists experiences with life, friends, family etc. and that same work then resonates in many different ways with viewers depending on their frame of mind and frame of reference, which even if silent, results in a dialogue. Music, well, on the one hand it is solitary in the moments of learning to play one’s instrument, but after that it can be a very communal and fluid experience. My time in Madrid has made me EXTREMELY grateful to have the ability to play and sing because it has allowed me to participate in spontaneous jam sessions in the plazas and parks here with people from all over the world just passing through. We have not always had a common spoken language, but the idiom of music has allowed for profound exchanges to transpire and suddenly, it is not just the people playing or singing involved, it is a whole circle of “spectators” who are now ACTIVELY participating in and helping to create the art in that moment.

I am a big fan of breaking down those rigid definitions of passive audience and active artist and so anytime there is a way to bring everyone into the fold it is a beautiful thing. I would say though, that transitioning from live performance to recording has been tough for me in the sense that I am not physically part of the instantaneous response to the art. It is a nice feeling though when people say they have been listening to a particular song on their own time in their own space and able to articulate how that theme resonates with them so I guess the reflection and response part comes in then 🙂

How do your current artistic endeavors fit in with that definition?

VG: I am in a huge stage of transition in ALL aspects of my life. At times it can be really challenging to know who I am or where I am because of living in two different countries, cultures, groups of friends. The common denominator has been my music. I have performed cover songs form most of my musical career. I am not ashamed of that-in fact I love interpreting great songs a new way.  Now, because I have just recently started to create new music and actually record it and THEN actually share it, my friends and family in Chicago and elsewhere have the opportunity to comment on what I have been creating here in Madrid. The feedback has been lovely, if at times overwhelming. It has though engendered a new dialogue…musicians I have collaborated with in the past back home are hearing the stuff I play here and want to make plans to create when I get home for the summer. I am hoping it is not too grandiose of a plan to try to get some trans continental stuff going and have musicians from both locations working together on the same pieces. I am not technologically savvy so we will see if I can get to that point.

VG: I still perform covers when asked to play longer shows but in connection with the last question, I am really excited about the work I have been doing with Peter Muller. Really, it has come as a pleasant but wonderful surprise how two people from totally different backgrounds and generations..I am not a grandma but.ok lets just say I grew up in the 80´s , anyway it´s great that we can just click and make things happen.  I come in with a chord or two or one line of verse and suddenly there is a whole song. We jokingly call a side project the “dregs” because after we are finished recording whatever it is we are working on for the day there is some kind of awesome spontaneous instrumental number that just surfaces. I would like to see in the months to come where we can go with this.

VG: In general the people who inspire me are everyday folks who even with extenuating or stressful circumstances find it in their person to be kind and giving to others. Truly, I am a believer that people flourish and become their best selves when shown support, and kindness and nurturing. There is a quote which I feel best embodies this notion:“Too often we underestimate the power of a touch, a smile, a kind word, a listening ear, an honest compliment, or the smallest act of caring, all of which have the potential to turn a life around.”- Leo F. Buscaglia

On a musical level, man, there is no dearth of people who inspire but if I have to be true to myself, it is seeing women, young or from previous generations who sing and play their own music. I listened to lots of Billie (Holliday) and Ella (Fitzgerald) as a young woman but truly grew to appreciate Nina Simone as I got older and realized just how amazing she was as a composer and performer. Currently, I am really digging on Esperanza Spaulding, Lianne la Havas, Nneka, Asa, and let me not forget Tracy Chapman. I think listening to her and seeing her in concert a few times in college made me want to pick up the guitar and play. And in the world of Spanish music….I love Bebe and Amparanoia.

VG: Well, I definitely have to thank my sister Laura Garcia who may not always agree with the path I have chosen but has always supported it. The Q4 collective in Chicago and Multi Kulti for allowing me to play so many great shows.  For sure all the musicians in Pilsen in Chicago…amazing amazing talent in ONE neighborhood. I have been lucky enough to be accompanied by some wonderful son jarocho groups 🙂 And in Madrid…well shout out to the Triskel open mic regulars. I can´t believe how many uber talented people come to share their music in one crowded basement! Last but not least Domenichi Morris and Ricardo Chavez, my awesomely talented musical partners in crime these past few years in Chicago!

Listen to Vivian Garcia on Soundcloud