Andréa Harris is a visual artist based in Seattle, Washington, who has also spent time in Washington State, Boston, Florida, and France – each of which has naturally impacted her artistic practice in different ways. Andrea describes Reflection and Response as an interaction between the artist and their work — with each entity active in the dialogue. Her work is a result of this ongoing conversation and she uses various mediums such as painting, photography, collage, digital video, and sculpture. Along with her words, Andréa presents specific pieces from her incredible collage and sculpture projects EXPERIENCING THE CENTURY and OUR EYES THAT ARE EVER MORE MY OWN. Peep the dialogue below and stay tuned for more exciting projects from her workshop! 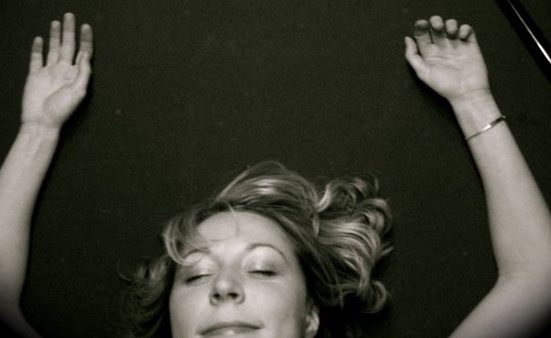 Making work turns into a conversation between reflection and response — sometimes the artist is the one responding in the work, but other times the work talks back and makes its own demands to be heard.

AH: I am from the Pacific Northwest, and grew up in several towns near Tacoma, WA.

There is something to be said of place and creative work. Everywhere I’ve lived has had a specific head-space to it. It’s been easy to make work in some places, but nearly impossible in others. Having lived in Seattle, Boston, Sarasota (Florida), and three summers in South-West France, I have experienced a variety. However, I have yet to find the place I work best with.

Right now I’m in Seattle, WA. It’s the city I consider home. I have a feeling there are some explorations ahead of me though.

AH: As an artist and general introvert, the majority of my time is spent in reflection. Reflection isn’t a place of comfort. It is a place of unstable ground and a catalyst for change. Reflection is the foundation of Response, but the creation of work contains both. Making work turns into a conversation between reflection and response — sometimes the artist is the one responding in the work, but other times the work talks back and makes its own demands to be heard.

AH: The overarching concept I find myself fixated on is the idea that reality is malleable, fluid, and constantly created. I explore the flexibility of reality through: the relational boundaries between the body, consciousness, psychological states, ideologies, and perceptions of the self, the other, and the transcendental. My work operates in a space of questioning experiences and concepts. It is the product of reflection and response, the push and pull between the two. I enjoy working across disciplines, letting the concepts I’m working through dictate or have influence on whether I use painting, photography, collage, digital video, sculpture, etc.

AH: Recently I have been working on a series titled “EXPERIENCING THE CENTURY,” and expanding my experience with video editing and manipulation. History, memory, and representation have always been fascinating to me. The subjects together can be taken as absolute, and are often taught as such in grade school and high school when fact memorization is prized over questioning. However, once questioned, history, memory, and representation go limp. They becoming these malleable concepts that can never be absolute.

“EXPERIENCING THE CENTURY” was birthed when, after having struggled with these ideas, I acquired a book titled “Century” in which over 1,000 pages of historical photographs of the 20th century are shown chronologically. Having only been 10 years old in the year 2000, all the the events in the book occurred before any of my own personal experience of current events. My reaction with the book was visceral. In it is photographic representation of mostly traumatic and brutal world events. How is one supposed to process, understand, and internalize these representations when one is so removed from the actual events? The collages are a challenge to a traditional story telling of history by taking photojournalistic representations and severely manipulating them, mixing their time lines and geographies to create new history that is both real and artificial.

Going forward, I am interested in visions and predictions of the future, and how those ideas play out in the present, as well as the concept of hyperreality — the blurring lines between simulated reality and the physical world. I’m hoping to work more with video and experiential art.

Andréa Harris – OUR EYES THAT ARE EVEN MORE MY OWN

One of my projects, “OUR EYES THAT ARE EVEN MORE MY OWN” is a large scale interactive sculpture intended to create intimacy and alienation simultaneously through participation. I haven’t had the money to complete the project yet, but I hope to raise funding to produce it in the near future.

AH: Inspiration has been coming to me in the form of books. I have been devouring books from science fiction writers Philip K. Dick and Ursula Le Guin, and wrestling with giants such as Deleuze and Guattari’s A Thousand Plateaus: Capitalism and Schizophrenia. These books stretch my imagination, and challenge my experiences and concepts of the world.

My childhood is a source of inspiration in a strange way for me. I was raised in a religious community that was all inclusive. I went to the schools, the churches; everyone in my world subscribed to the same ideology. Religious/spiritual experiences were expected in everyday life, and concepts of the world were rigid. I didn’t exit this world until I was 18, and the slow removal of context has given me new eyes and a great amount of clarity. When it comes to understanding myself and other’s experience in the world, ideology is key. One must be aware of the ideology they operate under, why it’s there, and where it comes from. What we experience is not stable, it’s constantly changing.

AH: Question everything and be ruthless!

And also my friend Peter Muller for involving me with the Collective. Thanks!

Check out more of Andréa’s work on her website: www.andreaharrisstudio.com