What interested me most in those frames was how the video–the digital eye–reproduced them. A machine doesn’t have the same preconceived notions of what a body looks like. It doesn’t see it the same way we do, where in a confusion of limbs we always pick out what is intelligible to us.

AS: I grew up in South Florida, but I very recently moved to Los Angeles, via San Diego where I attended graduate school. I swung from palm tree to palm tree.

AS: To me, Reflection refers to a kind of information processing; whether it is a mental reflection (memory) or the reflection on a surface of an image or group of images, say with a mirror. Either way, Reflection is affected by its medium—by the perception of that medium. One’s memory of an event, for instance, is influenced by their position (physical/emotional/political/etc.) within that event. Or, if you think of fun-house mirrors, the same applies. We laugh at the reflections in a fun-house mirror, or they disturb us, because they do not conform to the views we already hold of our own bodies. But I think all of these reflections hold a kind of truth, even if they are sometimes considered just pale imitations of what they reference. Who is to really say for sure, though?

I think Response fits snugly into Reflection in that it is born out of a similar type of processing. But Response comes from the sum of a number of reflections, or experiences. In other words, there’s math involved. But because of all the different variables, it is easier to think of Response as a closer measure of the subject than Reflection. Like this interview versus the picture of me it starts out with. 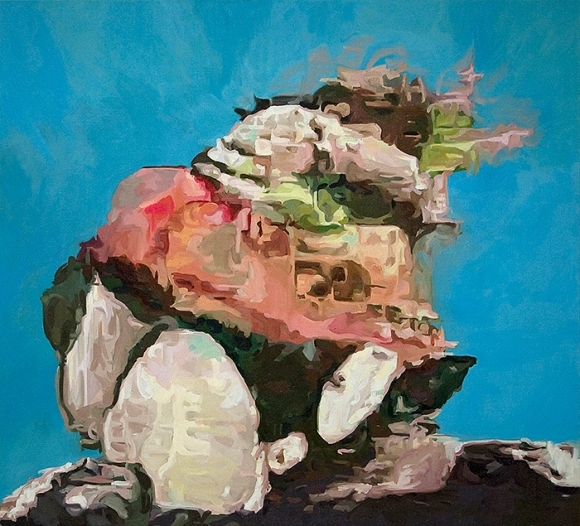 AS: Well, a lot of the work that is pictured here is from a recent series of paintings, which used as its subject split-second frames from highly compressed Youtube videos. They’re bodies, groups of bodies. The specifics of who they are or what they are doing don’t really matter in the long run. What interested me most in those frames was how the video–the digital eye–reproduced them. A machine doesn’t have the same preconceived notions of what a body looks like. It doesn’t see it the same way we do, where in a confusion of limbs we always pick out what is intelligible to us. We will always see the arms, the legs. Machines don’t always do this, and instead they’ll reproduce the limited information that they are given, like colors, values…there’s less separation, the boundaries blur, become masses. I like to think that maybe the machine sees something that we cannot, that this kind of collapse happens sometimes. The idea fascinates me.

Then, of course, I reproduce these moments in paint, and I bring with it all of my own baggage, all of those painterly considerations, color theory, all that junk. It becomes twice removed from its source. I’m responding to a reflection, in a sense.

AS: I’ve been working on this one project, a series of prints. They were born from some writing that I was doing, and I really see them as a way to combine my writing and painting practices, which is something I’ve been trying to do for a while. A couple examples are pictured here. They are essentially bits of information that I’ve collected or found during research, during conversations with others. I’ve taken to calling them Teratomas. Don’t Google that word if you are squeamish.

Anyway, I have made a lot of them so far, and right now I’m working of strategies of display—how they work as images on a wall, etc. I’d like to make them into a book, eventually, as well.

AS: More than anything: conversations. I read a lot of different things, and I digest it all and spit out whatever the combination makes. A lot of my favorite things come from science—or pseudo science, science fiction, medical anomalies or really any kind of deviation from pattern, definition. You talk about these things with people and they tend to respond in really wonderful and exciting ways. Or, at least—ways that I think are exciting.

AS: Only that I would love to come to everyone’s dinner parties, even though you probably shouldn’t be talking to me while you are eating.

AS: I’m going to follow her lead, and shout out to Nichole Speciale, who recommended me to the Collective. Hey, girl.