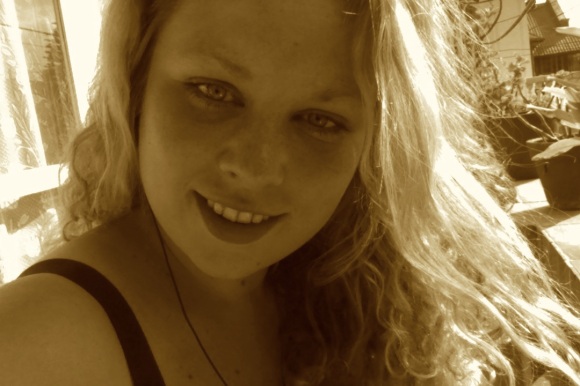 Sometimes writing is a way of making sense of the world as I experience it. But my writing is also meant as a ‘conversation’. Meaning is created partly through the eyes of the reader or the audience and my work doesn’t try to show the truth, but can contain many.

SvL: My name is Stella van Lieshout. I grew up in a small town near the coast in the Netherlands, lived in London for a year in 2012/2013, spent 3 months living in Kathmandu and currently I’m preparing to go to Malta for two months as a writer-in-residence.

SvL: To me, reflection and response are extremely important during the writing process and even after the play is finished. I write alone and preferably night after night, but there are always several moments where I discuss the play or story with different people from different backgrounds to sharpen my thoughts and get valuable feedback to make it even better. The best ideas are often created with more than one mind.

Staging the play after writing is continuously reflecting and responding as new ideas and thoughts emerge from the minds of the director, actors and designers and through working with the material itself. And these connections are extremely valuable and can teach you a lot of new things.

Reflection also means hiking. I’ve walked a couple of long-distance paths and for me it is a way of processing experiences and reflecting upon them, while discussing with myself along the way.

SvL: I write a lot about people who feel stuck and lost or are trying to find a sense of belonging. My characters usually have strong beliefs and dare to question. Through these characters I can reflect on life and respond to issues that are important to me from different points of view. Sometimes writing is a way of making sense of the world as I experience it.

But my writing is also meant as a ‘conversation’. Meaning is created partly through the eyes of the reader or the audience and my work doesn’t try to show the truth, but can contain many.

SvL: The last play I wrote (and directed) was a play for a group of young actors (19-24) in Kathmandu, titled “+2, The School of Life”. In the play, a group of friends forms ‘The School of Life’. It’s a secret society where they learn everything they find important to life, but don’t learn in school. The play was written in English and then translated and performed in Nepali, an amazing experience.

SCENE 8. WHEN THE GIRL WANTS IN.

The Narrator walks up on stage and comes really close to the audience. In the back, THE BOY and THE GIRL dance, without touching each other.

In the last few months there were so many cups of tea
That even I lost track of time
She had been afraid to let him know
that she had been following him
He was afraid to tell her what he was doing
And so they spoke about all and more,
but never about the School of Life.
It was something that slept between their dreams
So they could never be close enough
Until today…

THE GIRL AND THE BOY have stopped dancing. She looks very serious.

Girl turns around, ready to walk away.

The girl turns back again and looks at him

Currently I’m working on a play about six people surviving death after ‘the others’ burned down their town. In June and July I’ll write a new play as a writer-in-residence for a theater – Teatru Salesjan – in Malta, where we’re looking beyond the borders of culture and writing. I’m very excited to see what comes out of that project.