The beautiful thing about Reflection and Response is that it is about experience – interacting with as well as observing life and the cycles it presents. When it comes down to it there is a special chemistry that bonds people to their environments and likewise plugs us into a matrix of aesthetic circulation. It’s a dance—romantically passionate with a sort of rhythmic groove, a backdrop scene set by a flow or mood and daring to go wherever creativity leads you. Here, Padraig O’ Connor eases the Collective onto the dance floor of artistic expression as he spins a tale full of energy and intuition. This is great, almost reminiscent of an amazing first date. Enjoy… 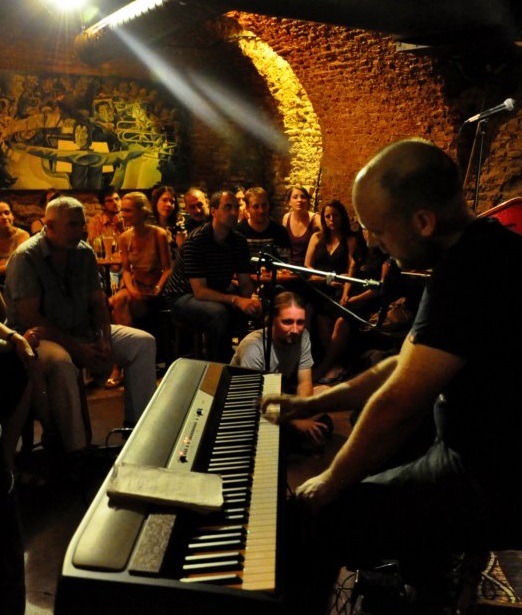 As a songwriter, there´s a constant battle to capture those little moments of magic where you get an idea for a melody or a phrase…So the reflection is that first inspiration… your mind making sense of the world… and how well you respond [to that initial engagement] influences how well the song comes out. It´s a matter of not getting in the way of the inspiration. The best songs just flow.

PO: Where I´m from is a village called Kill in Co. Kildare, which is close to Dublin in Ireland. Difficult place to hitch-hike to. Picture holding up a sign that says KILL on it. I moved up to Dublin after college. It´s a great city, and has always been a big inspiration for me. It´s full of history. We´ve had writers like Joyce, Wilde, Yeats, Kavanagh, Behan who´ve lived in the city and written about it, so the streets are alive with stories and verse. Where I´m at is Madrid; Malasaña to be exact. I´m recording an album about Dublin over here in a friend´s studio in Goya: Rob Green and Richard Harris’ Spaceland.

PO: As a songwriter, there´s a constant battle to capture those little moments of magic where you get an idea for a melody or a phrase. Those ideas can come first thing in the morning, when you wouldn´t mind sleeping in a bit longer, or when you´re away from home with just your phone to record them, or before you go to sleep late at night, and you have to write them down there and then or lose them forever.

So the reflection is that first inspiration… your mind making sense of the world… and how well you respond [to that initial engagement] influences how well the song comes out. It´s a matter of not getting in the way of the inspiration. The best songs just flow.

I like to collect little words of wisdom from other songwriters, and there´s something John Lennon was supposed to have said to George Harrison that ties in with this. The gist of it was: as soon as you get the idea, try to finish it. Write an extra verse, try to write a bridge, because that original inspiration might not come again, or if it does it may have changed into something else.

So that´s my approach. The reflection is very important, but you don´t really have control over that, it just happens. The response, to try to stay true to the essence of it, is probably more important. It´s that old adage: “1% inspiration, 99% perspiration”.

How does your song Free fit in with that definition?

PO: This song I wrote, Free, is about a weekend I had in Ireland. I was back for a friend´s stag party in Carlingford, but before leaving, I met up with some friends to sit out on the grass in front of The Pav (The Pavillion, the bar in front of the cricket pitch) in Trinity College, Dublin, where I did my Masters in Music & Media Tech. It was a beautiful sunny day, and I spent a few hours just enjoying that with friends. You don´t get so many [sunny days] in Ireland, so when you do, you have to take advantage of them. I had already written the melody, but when I got back to Madrid, I woke up quite early the next morning (unusual for me) with the song playing in my head and went straight to the piano and guitar, finished the new lyrics, and recorded a demo of it. It sounded something like this:

The first verse is about my hometown, Kill. There´s an old pub there called The Dew Drop Inn, and as a kid I loved the double meaning in the name “Do drop in…” I always pass by it on my way into Dublin and that´s where I was going that day.

The second verse is about walking by the Grand Canal, where one of my favourite poets Patrick Kavanagh was inspired to write some of his best poetry. It´s a nice spot.

The third verse is about sitting on the grass by the Pav in Trinity College as the sun goes down, after the exams and deadlines were all over with. Nowhere you have to be, nothing you have to do, taking your foot off the pedal and letting the world take care of itself. Some days are just perfect like that.

It features Woody Woodman on drums, Karl Twyford on electric guitars, and on backing vocals along with Amber Stiles. Still needs a bass and a couple of other instruments.

PO: I´m constantly writing, but mostly I´ve been working on the album, which will be called The Lights of Dublin. A lot of the songs I´ve written about down the years were about my experiences living in Dublin, so it seemed natural to use the city as a theme for my first album. They´re mainly written from first hand experience, and songs name check different parts of the city. Some songs are about good times in the city, others about struggling to pay rent and keeping your head above water, other about characters I´ve met, places I´ve been.

One of the songs, Porcelain Doll is like a modern fairytale, inspired by working in an office, and seeing some really two-faced behaviour going on there. It´s about a woman who pretends to be all sweetness and light on the outside, but as soon as a person´s back is turned says something horrible. People who act that way are never truly happy though, so she meets the same fate as Humpty Dumpty, but unlike him she has the opportunity to pick herself up and start again.

That one wasn´t written recently, but it´s a finished song that I´ll be including on the album. It features Julien Lonchamp on bass, Adrian Hart on violin, and me on guitar, melodica with some glockenspiel thrown in for good measure.

I´ve had help from some great friends and great musicians too: Rob Green, Richard Harris, Woody Woodman, Karl Twyford, Amber Stiles, Lionel Gray, Clem O´Regan, Sean Twomey, John Leo Carroll among others. And I´ve even recorded my dad playing harmonica on one track. The goal is now to finish it. At the moment I´ve got most of the basic tracks done, so I´m looking to record extra instruments like trumpet, sax, trombone, violin, viola, cello. It´s taken me a little bit longer to locate those musicians, but I´m hoping to get most of those tracks down in the next couple of months.

After that, I want to move on to album number two. I have a big backlog of songs to record, so it´s a matter of getting them down and moving on to the next ones.

PO: Anything and everything inspires me. It´s all about feel. It´s like Keith Richards says:

“The thing about being a songwriter is, even if you been fucked over, you can find consolation in writing about it, and pour it out. Everything has something to do with something; nothing is divorced. It becomes an experience, a feeling or a conglomeration of experiences…”

As I said above the album will be called The Lights of Dublin, and it´s going to be a kind of concept album. When I fly into Dublin at night, it´s all lit up, and on my way home to Kill I look back at the lights of Dublin from a distance. When I lived there, I was in a band called The Lights, and this was one of the songs we recorded, and another song that´ll be on the album is a tribute to that band. It was made up of three of the most creative people I know, and yours truly. Conor O´Hara on drums, Julien Lonchamp on bass and Karl Twyford on guitars and vocals, while I sang and played keyboard.

This song, Daydream, started out as a stream of consciousness thing, where I wrote lyrics that suggested a melody as Karl simultaneously came up with daydreamlike chords on a guitar. We used to record all our ideas on Dictaphone tapes, and somehow we managed to lose the only recording of this one for about a year and a half. When we eventually found it, it took us another half a year to work it out, write the intro, and bring it to the band. It was recorded on the Roland Multi-track recorder live with the band and then we overdubbed vocals and samples from the television, traffic, and the Dictaphone. Very oldschool. 🙂 It starts off with the sound of waves recorded on the seashore at Dublin Bay.

For me, that track is about the process of inspiration, about a smell, a taste or a sound that brings you back to your childhood, or somewhere you´ve been, about the half dreaming state before you fall asleep, building castles in the sky, possible worlds, echoes of something you once heard, a memory of a time or a dream, or a daydream…

PO: I do a Song of the Week blog here on wordpress where I choose one of my favourite songs, and go into a bit of the background behind it. It´s not always as weekly as it should be, but I try to post there most weeks.

Thanks a million to Peter Muller for the interview too, and keep up the great work with Fede Valenciano doing the open mic on Sundays in Café La Palma.