Greetings! The Feature Series Rolls On. Today the LIFESTYLE’s Collective heads back up to the Pacific Northwest city of Seattle, home of dope Thrift Shops, Marshawn Lynch, and Stefan Paul George. My man Carlo Mejino brings us his perspective as a young and accomplished creator. His clothing brand GAJ has a growing presence around the Seattle Streetwear scene in multiple shops, his own store, and online. Clothing is only one of his creative outlets with music and videography providing other ways for this Craftsperson to practice Reflection and Response. Peep the interview below for words from a new voice and check the links for looks on GAJ and his other projects. Peace! 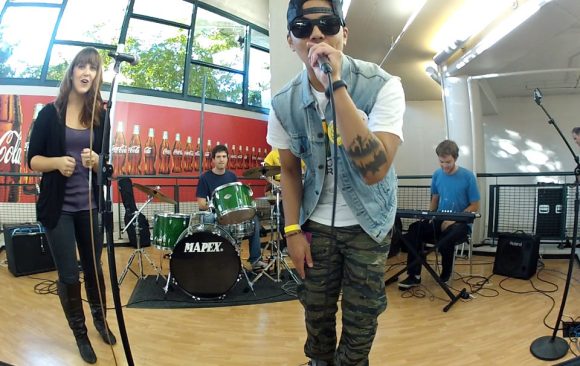 CM: I am from Seattle WA, born pure of 100% Filipino blood from my two parents who moved over to the U.S. in the 70’s and 80’s, respectively. I was raised in the north side where I went to Catholic school through the age of 18 until I went to the University of Washington, my first public school. Basically I grew up on lumpia, church, rain and the Seattle Supersonics.
Right now I am back in Seattle after spending a couple years in Los Angeles chasing TV and film production work after college. I started my own clothing company called GAJ that is currently available in a couple local shops as well as my website (www.GAJSeattle.com) and I am currently working on that passion project among other creative outlets such as music and video production. I play in a band with some college friends (Victory Lap) and from time to time I make videos to try and make my friends laugh. In summary, my life is clothes, Internet, music, videos and friends. Basically, I picked back up where I left off before I moved from Seattle back in ’09 haha. Old habits die hard.

What does Reflection and Response mean to you? How do GAJ and your other projects  fit in with that definition?

CM: To be honest, I haven’t had a lot of time for reflection because I am constantly on the move as I work on one project and quickly go to the next one after the last one is completed. My work is constant in that I’ll be working on, say, a new design for a shirt, then I’ll be working on an event, then a new song, then something for the website or Facebook page, and then back to working a new piece of clothing, and so on and so forth. I’ve never really been able to sit back and enjoy the fruits of my labor, so to speak. My hands are constantly in different pots and I wear many hats, so there is always something going on.
Maybe that time for reflection is right now.
My response? I still have more work to do. I’m never satisfied

CM: Recently, I’ve slowed down on the clothing aspect as it has taken up pretty much all of my time during the past year and I believe it’s at a point that is very manageable for a one man operation (because in the beginning it was a struggle in every sense of the word) so I’ve sort of re-molded it into a side-project that I can do along with a 9 to 5er. Production of new product is a bit slower, but I really focus on doing quality releases so those that have the patience will be handsomely rewarded.
Next up for me is a new music project. After getting the ol’ band back together (minus our talented and gifted guitar player, Peter Muller) for the Victory Lap show at the KeyArena, I’ve been fiending to get back on stage and perform again. Even though we played some pretty cool shows back in college, I feel as though I’ve gotten better at performing with those years away from the stage in terms of confidence and stage presence. The problem is that I’ve realized I can’t just rely on these other guys in the band to get my jollies, playing pretend on stage since everyone has their own lives and obligations, so I’ve started recording my own tracks produced by one of my oldest collaborators, Moynilectric, along with some new producers. I’m hoping to get some sort of mixtape done by year’s end. We’ll see though because so far I’ve only finished one new track and I’m still writing for others.

CM: My inspiration really comes from the people around me; my friends and family. Even though we’re all in different lanes and lifestyles (mine very different than most), I look at all of their accomplishments and success and try my damnedest to reach the level that they all occupy. The best part is seeing how very happy they all are with their lives and achievements, and their strength and confidence in taking themselves to a higher level. The funny part is that we are all so proud of and support one another that it is almost sickening haha. As much as I tell all of them how I’m so proud of them and how inspiring they are to me, they never hesitate to turn it around and say the same about me, even when I don’t feel the same way about myself. I’m surrounded by people who make me want to do better! Talk about first world problems…

CM: As cool as it is to do such an introspective piece and doing the inadvertent reflection & response within that I’ve never really been able to fulfill until now, I don’t believe that I deserve to do any such feature haha. It goes along with never being truly satisfied since I don’t believe I’ve earned the attention of anyone that would find any piece of my story interesting (yet), but I am very thankful that I’ve gotten the type of attention that someone believed is worth the time for a feature. It feels pretty good when someone’s paying attention. (Let me say “attention” one more time…..thanks.

S/O to Peter for asking me to do the feature because the lens should really be pointed in his direction since he’s more interesting than I am.And shout out to everyone who still enjoy my various creations and endeavors because they’re the real motivation since I tend to get tired of what I’m doing.

Talk of the Town: Craft and Craftspeople

Welcome to another installment of the LIFESTYLE’s Talk of the Town series. This series consists of a platform for discussion. We strive for The Lifestyle to be a venue and we appreciate the love we get on this series, the Snapshots From the Collective series, and the Feature series.

When observing or experiencing crafts do we/ should we ignore the personality of the craftsperson? Collective member Megan sent this article in the Huffington Post that discusses painter Paul Gauguin’s exhibit on work from a period in Polynesia. The article cites a criticism that focuses on Gauguin’s activity during this period and how that can effect how some viewers see his work.

“Decisions like impregnating a thirteen year old and giving her syphilis surely cast Gauguin in an unflattering light. And yet the artist’s unethical and perhaps delusional escape to paradise led to one of the most revolutionary shifts in the visual vocabulary of all time”

Can we ignore the craftsperson when experiencing craft? Should we ignore artists when looking at art?

We look forward to your responses below in the thoughts box!