Songwriter David Bornstein comes at us straight out of Madrid via New Hampshire. We got a chance to catch up with him in Madrid after a performance at Café la Palma, and he brings us some inspiring Reflection & Response below. Exploring themes around his music and independent creative processes, David lets us know what’s good from the mind of an active creator establishing his own lane. Peep the dialogue below and catch his group PATIENT 108 live in Madrid this Saturday! 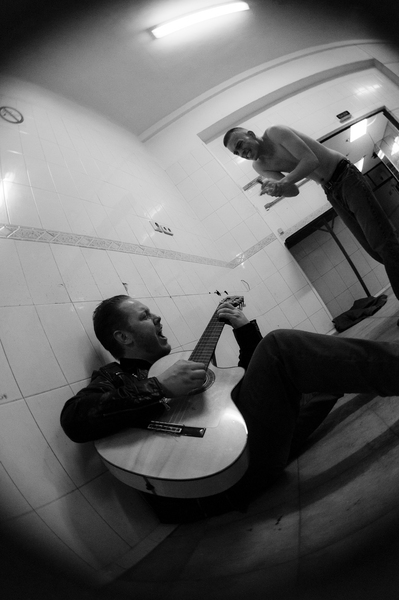 I believe music has the power and place in society to create awareness and make people think and question the world in which we live. Candor is the key.

DB: I spent most of my life in Durham, New Hampshire. I went to the school district and then after traveling/working majored in history with a dual major in International Affairs.

I didn’t really start playing the guitar or writing songs until after I graduated high school, but slowly and surely it became a part of me. After I graduated from U.N.H I came to Spain to work on a music project with an old friend fusing original alternative rock with the technicality of flamenco guitar. After many a trial and tribulation and multiple attempts at making the project work I found it necessary to cut the cord and move on. When people ask me what I’m doing in Madrid, I can´t help but remember that I originally came here to work on that project. In the end, Madrid has been the place where I learned to find myself and grow as an artist. That’s something I find more important than any song or work alone.

Shortly after the project ended I started playing solo gigs and organizing shows with other musicians at bars and pubs around Madrid. During this time I focused on improving my abilities on the guitar and developing a more percussive sound to emphasize rhythm.

Right now I’m playing with my newly formed band PATIENT 108.  Kester Jones (electric guitar) hails from England, Xabier Aquino (bass) is from Mexico, and Q (drums) has an identity crisis. They’re all phenomenal musicians and a pleasure to work with. We released our first, 5 song EP, Preacher’s Got The Gun,  in October 2013.  You can stream or download that album here:  http://patient108.bandcamp.com.

Our next show is February 1st, so be sure to come if you live in Madrid!! Details below.

DB: To me the ultimate test of good music is candor. If music, any type of music, comes from someplace honest and earnest with love or passion, then the result will be something natural, unforced, and unique. There are no rules or genres to this, it’s just something I feel when I hear something.

Music doesn’t have to have a message or exactly mean anything at all to be earnest, but I try to write songs that say something or raise questions I think are important without giving any exact answer. I’ve become interested in working on songs with themes of human nature, war, identity, and illusion. I spend time reflecting on these issues not only as objects to be studied apart from myself, but as an inward study of self inquiry. The end result is a response; a social commentary, and a reflection of society which ultimately serves to express my individual experience and perception. I believe music has the power and place in society to create awareness and make people think and question the world in which we live. Candor is the key.

DB: Each of the three songs I’ve included deal with themes mentioned above in their own particular way. I don’t like to say too much about a song, allowing instead for each listener to reflect and respond to them in their own way.

Transmigration deals with identity, temporality, and the interconnected nature of all things.

Right Gun looks at power structures in the U.S. and how we are used as weapons against ourselves.

DB: Playing out and doing everything possible to spread the music far and wide.  There also are several songs I want to work on with the band, and other songs I’m still in the midst of writing.

DB: If you like the music, want to say hi, or just want to chat then send us an email at Patient108band@gmail.com. I can add you to our email list and keep in touch. Everyone in the band is a little crazy, but very friendly, so don’t hesitate to give us your thoughts.