Musician and songwriter Amber Stiles is at the center of a talented and inspiring group of artists centered in Madrid, Spain. I met Amber at the well-known Triskel Tavern where musicians from all over the world seemed to find a home on its stage during Thursday open mics. Since playing there, Amber has been performing all over Madrid focusing both on her own material and collaborating with others while beginning recording at Spaceland Records. Peep the dialogue below for Amber’s words on her folk/country music, her artistic growth in the city and other ideas from this expanding and creative artist. 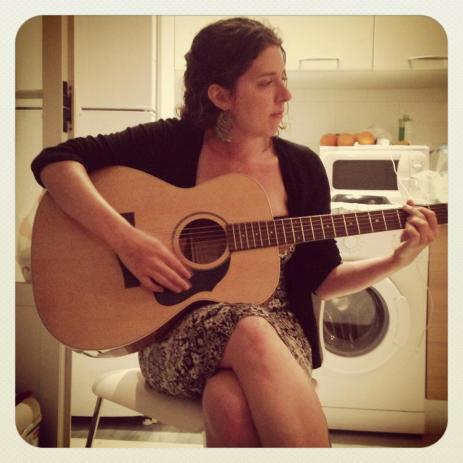 One of the reasons I love folk music and country is that it’s generally very simple in form and it allows you to explore subtle variations with your voice, tempo, lyrics, etc. I enjoy singing a song the way that I’m feeling it at that particular moment.

AS: I’m from a small town in New York State, about half an hour from the Canadian border. It’s about 6 hours from the City and 4 hours from Buffalo. No one can really figure out where it is. We have a Dairy Princess Parade and obviously lots of cows. I’ve moved around quite a bit since I left home but I’ve spent the last 4 years in Madrid, Spain.

AS: I’ve never really thought about it before but I suppose the word reflection conjures up a few thoughts and images. I associate it with a mental process, a forming of thoughts and beliefs. On the one hand I think it’s important for us to process what we see and what we experience. I interpret and share my experiences to connect with other human beings. But at the same time I think too much introspection can make us overly cerebral and rigid. If we assign an idea a name and call it a belief we’re really limiting ourselves in a lot of ways.

I suppose I relate more to response. I approach music in that way, at least. I don’t try to overanalyze a song or break it down into a set formula. I prefer to intuitively explore things. If I think about what I’m doing too much I get overwhelmed and blocked. Yeah, Response is definitely more interesting for me. I figure my intuition is utilizing more resources within me than my conscious, rationalizing brain can muster.

How does folk music fit in with that definition?

AS: One of the reasons I love folk music and country is that it’s generally very simple in form and it allows you to explore subtle variations with your voice, tempo, lyrics, etc. I enjoy singing a song the way that I’m feeling it at that particular moment. One of my first idols was Billie Holiday and I always admired how much feeling she put into her vocals. Sometimes her songs were sad and slow, other times lively and upbeat. I always try to stay tuned into the meaning of a song and how I’m interpreting it in that moment.

AS: Recently I’ve been collaborating mostly with Miguel Gonzalez who is a very talented vocalist and gifted songwriter out of Texas. We play acoustic sets at intimate cafés around Madrid which is the atmosphere I feel most comfortable in, really. I’ve also been providing vocals for Padraig O’Connor and Richard Harris, both musicians that I have deep respect for.

My next goals are to write some inspiring songs and get into the studio. Richard Harris is running Spaceland Studio at the moment and it’s a great opportunity to capture a moment in my life with the incredible musicians I’m surrounded by. I’m decidedly lo-fi so taking the plunge into the studio is big for me.

AS: Being around talented musicians inspires me. I was lucky enough to fall into a community that is really open and accepting and not afraid to experiment with different sounds and styles. Life’s challenges inspire me. The way they keep hitting you and somehow you come out of it all stronger and with a new perspective. I’m always amazed at human resilience.

AS: I’d like to encourage anyone that has a little voice inside them that is looking to be expressed to listen to that voice! For you, for others, share what you have experienced and what you have to offer. However small and insignificant you may think it is.

AS: A big shout out to everyone that I’ve met and played with at Triskel Tavern. If it hadn’t been for the following people I never would have sung publicly, ever: Richard Harris, Sally Smith, Miguel Gonzalez, Padraig O’Connor, Mary-Elaine Jenkins, Peter Muller, Vivian Garcia, Elena Rosillo, Rico Adventura, Ben Gill, and Rich Beeley. Thank you! I love you all…

There are countless more people that have come to my shows and offered words of encouragement that had an immense effect on my progress. You know who you are!

Check out more of Amber’s work at the following links: